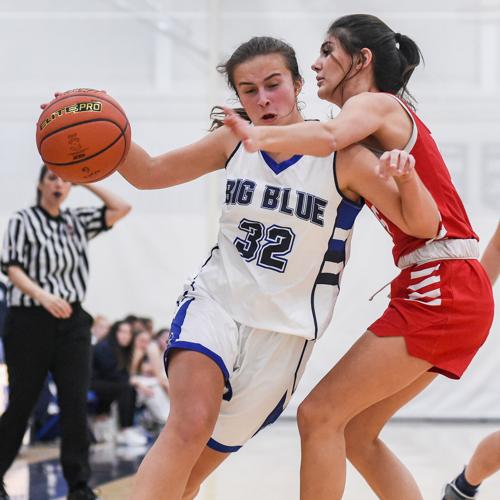 Freshman Samantha Ward of Swampscott, shown here driving to the net against Saugus, has been a pleasant surprise as a starter for the Big Blue. 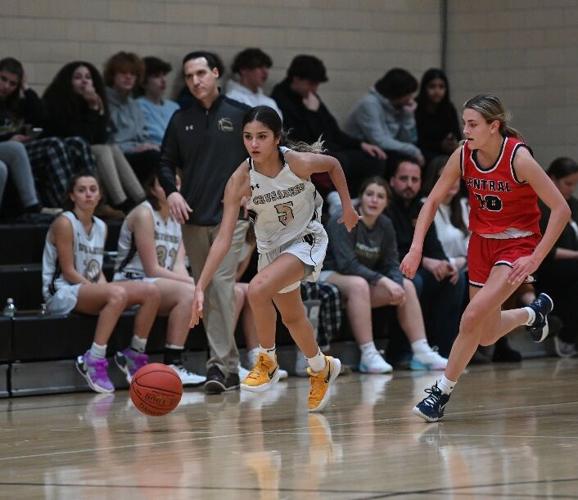 The play of Bishop Fenwick Anna Fertonani has seen her work her way into the starting lineup for head coach Adam DeBaggis’ (background) squad.

Freshman Samantha Ward of Swampscott, shown here driving to the net against Saugus, has been a pleasant surprise as a starter for the Big Blue.

The play of Bishop Fenwick Anna Fertonani has seen her work her way into the starting lineup for head coach Adam DeBaggis’ (background) squad.

There are some amazing freshmen on the North Shore girls high school basketball circuit this winter. These ninth graders aren’t just getting playing time with the varsity, but in many cases have earned a starting role.

Among the best are the three newcomers that start for Bishop Fenwick, two more at Swampscott, and Lucy Donahue for Ipswich. They are highlighted today, with more young guns featured in next week’s column.

Both Ward, a shooting guard, and Farnum, a forward, have made an immediate impact as starters for the Big Blue.

Head coach Katelyn Leonard saw Ward play as a middle schooler and knew right away she had a lot of potential. Ward is never afraid to take shots and can be deadly from 3-point land.

“Sam is working to get her shot up quicker, not allowing the defense to recover,” said Leonard. “She’s also working on developing the ability to attack the basket, becoming a dual threat on offense. Of course, she’s also working on defense every day and learning what it takes at this level bringing a great attitude and work ethic. She wants to get better, and it shows in practice.”

Farnum stood out in Swampscott High tryouts among good competition. Leonard admits she wasn’t sure where she’d fit in at the start of the season, but Farnum quickly asserted herself as a starter based on her basketball IQ.

“Lexi has a natural instinct for the game and has been improving each day,” said Leonard. “We’ve played against a lot of big teams, and she’s really learning the physicality of the game.

“She’s really working on being strong with the ball and having a variety of post moves at her disposal. She’s also learning how to play strong post defense and helping on the drives. She brings a great attitude, works hard, and is extremely coachable. The sky is the limit for Lexi.”

The Crusaders may have a young squad, but part of the reason for their winning record (7-5) are the way their three freshmen have all played big roles. Boyle and Fertonani are guards from Beverly, with Neilson hailing from Georgetown.

Head coach Adam DeBaggis has been fluid mixing his starters up, but all three have been in the starting lineup and regularly play 20-plus minutes per game.

“They’re on varsity because they’re all very talented,” said DeBaggis, “but more important they fit the mold of what we want in a Fenwick basketball player. They’re committed to team goals, self-improvement, and are fantastic teammates. We’ve seen a lot of improvement already from them with composure especially.

“In the first few weeks there were a lot of fouls and turnovers, but those have lessened as the year has gone on because our freshmen have worked hard both in practice and watching film,” he added. “They’re all great kids and we’re very happy to have them with us.”

Tigers head coach Chris Tolios has nothing but praise for his starting point guard. He knew Donahue throughout her middle school years and had her pegged as an immediate impact player once she got to high school.

“Ultimately, it’s her ability to play point guard and handle the ball that makes such a difference,” Tolios said. “We have confidence in her to get things going for us each possession, and that allows us not to worry too much about defensive pressure. It shouldn’t overshadow her defense, though, as she sets that for us as well and is able to anticipate plays to come up with big turnovers.”

Tolios noted that Donahue has improved greatly just by getting used to the speed of the varsity game and playing against opponents who may be three or four years older than she.

“(She does that) knowing she’s the focal point of other teams’ defensive game plans, which doesn’t make it an easy job. So it’s been impressive to watch,” Tolios noted. “In addition Lucy is acclimating to a new offense, and it’s all come quickly. She understands the game, but more importantly she’s a competitor who wants to be successful.”

The best thing Donahue brings to Ipswich, said Tolios, is being the anchor of its offense, where in an offensive set the point guard has to start it up. Donahue has both the mind and skills to do that with poise; she leads the team in points per game (14.1) and assists (31).. She’s also one of the Tigers best rebounders and 3-point shooters.

Zaiter, who is majoring in criminal justice, wanted to do so at Twohig Gymnasium in front of her family and friends, and not only did so but wound up with a career high 33 points to go with six rebounds in the Vikings’ 74-62 win.

“I couldn’t have done it without the support of my teammates, who kept feeding me the ball,” said Zaiter, the 19th player in SSU hoop history to hit 1,000 points in a career. “They passed up taking shots to get me the ball, which I really appreciate.

“I had been thinking about that game for about two weeks and knew 29 points wasn’t a stretch, because I had scored that many before. I made sure I ate right and had a nap beforehand so that everything was in place before game time.”

Zaiter, who is averaging 17.6 points and 9.1 rebounds per game, isn’t the first 1K player in her family. Her father, Joe did so at Salem High.

“It’s because of him that I love the game so much,” she said. “All those summer days he took me to a court to practice are paying off. He always tells me what I can do to make my game better, but he didn’t have a thing to criticize in that one.

Salem State head coach Ashley White, who started at both Salem High and SSU, was thrilled for Zaiter.

“She’s been a strong player for us,” said White. “The best thing is that Liz plans to go to graduate school here, so she can play for us next season.”

Zaiter wants to earn a Master’s degree with plans to be a school resource officer or probation officer working with juveniles. She is a Dean’s List student and just found out she has been welcomed into the National Honor Society.

With an 11-2 record overall and 9-1 in NEPSAC competition, Pingree has already accomplished two things it hadn’t been able to in recent years: beat Lawrence Academy for the first time in 15 years, and toppling Groton for the first time since 2017. Both wins came on the road by a combined score of 117-50.

The Highlanders are not only winning big, but everyone is contributing.

In another impressive victory over last weekend they topped Wheeler, 93-32 as junior Bella Vaz scored a school record 43 points, including 11 treys while only playing just over two quarters.

Senior captain Sam Jones from Beverly recently committed to play for coach Kelly Cole at Wentworth Institute of Technology. Jones has been one of the Panthers’ main contributors for the Highlanders.

“The whole recruitment process was a bit different for me,” she said. “When I was a sophomore it was the Covid year, then I was injured my junior season. I always wanted to play in college, but I started thinking if basketball was in the cards for me that was great, but the most important thing was finding the right college for me.

“I’m so excited I will be at a great school in the city,” she added. “I intend to major in computer information systems, which is business related. Playing for a woman coach is something I wanted, too. I went to one of their games against Gordon, and I like the style Wentworth plays.”

Home delivery and Digital Access customers of The Salem News get deals for restaurants, hotels, attractions and other businesses, locally and across the country.

Check out our series of podcasts on topics from high school football to Halloween in Salem.

To play the media you will need to either update your browser to a recent version or update your Flash plugin.

Featured Homes of the Week

Stay up to date on COVID-19
Get Breaking News

Sign up now to get our FREE breaking news coverage delivered right to your inbox.